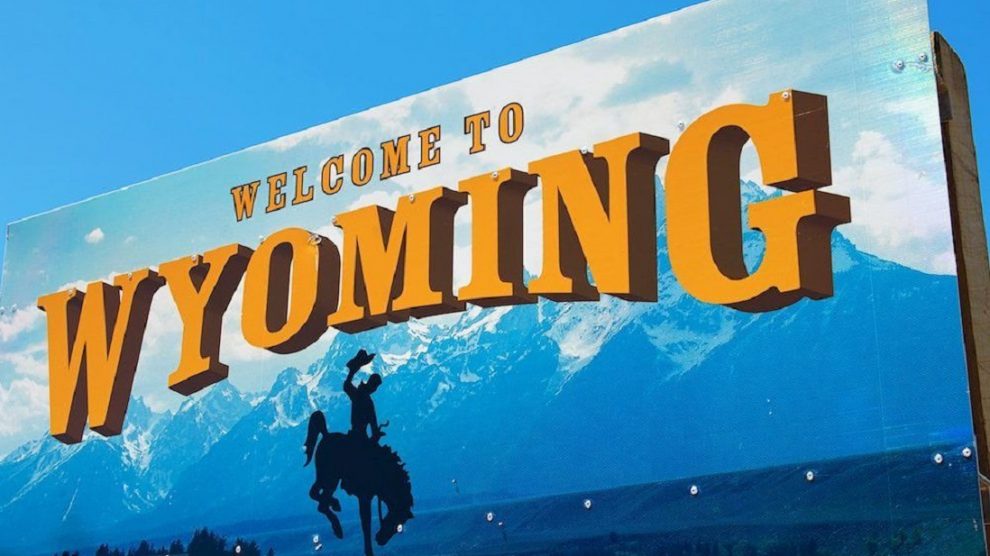 The state of Wyoming has established itself as a trailblazer when it comes to blockchain and cryptocurrency.  That reputation has been enhanced in recent days as it has emerged that new legislation will pave the way for the tokenization of stocks.

In the event of its incorporation into state law, the Bill would facilitate the issuance of tokenized stock certificates using blockchain technology.  From the document:

“A BILL for an ACT relating to corporate shares and distributions; authorizing corporations to issue certificates in lieu of stock certificates as specified.”

The bill clarifies that the term ‘certificate token’ is to be interpreted as a representation of a share that is stored in an electronic format.  Of more significance is the fact that it specifies that this information may be “entered into a blockchain or other secure, auditable database.”

The bill also recognizes that tokenized certificates could also be authorized by digital or network signatures i.e. the uniquely identifying cryptographic hashes of two officers or directors of a corporation. If the bill passes, it would become law as of July 1, 2019.

Wyoming is making a strategic effort to become crypto and blockchain friendly in an bid to attract blockchain related businesses to the state.  Late last year, the state legislature passed the Blockchain Bank Bill. That bill is understood to have major implications for the blockchain sector – making it easier for blockchain based companies to do business.

At the time, Wyoming had already enacted five blockchain friendly bills earlier in 2018.  It was expected that there were six more relevant bills in the pipeline and presumably this is one of them.

Caitlin Long – 22 year Wall Street veteran and co-founder of the Wyoming Blockchain Coalition has been has been instrumental in playing a part to drive blockchain legislation in the state.  She took to Twitter last week to express her approval of the passing of HB62 – another blockchain related statute:

“Another one in the books for #Wyoming, 8-1 on HB 62, which broadens #utilitytoken language enacted in 2018 and moves it out of securities chapter into its own chapter of WY law, creating a brand new class of property (digital assets).”

“Sandbox bill passed House committee 9-0.” . . .”Vote on bank bill deferred to next Friday, so stay tuned for updates on that big one.”

There’s no doubt but that Wyoming are moving on this with intent.

U.S. states vary in their approach to cryptocurrency and blockchain technology.  New York appears to have a regulatory regime which draws the most criticism from the industry.  Within the first three years of the state’s BitLicense being in effect, only four companies had managed to secure a license.  Eric Voorhees of Shapeshift stated in an interview with Fortune:

“Lets call the BitLicense what it is – an absolute failure.”

Delaware are in the process of ushering in legislation which will be equal that of Wyoming with regard to the ability to tokenize stocks.  Drew HInkes, General Counsel for Athena Blockchain and Adjunct professor at NYU clarified that the same is in the works for the state of California via Twitter recently: 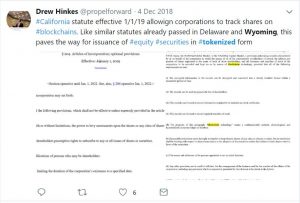 The state of Ohio has become the first U.S. state to accept payment of business taxes in Bitcoin.  Meanwhile, two senators in Colorado have proposed a bill which would make cryptocurrencies and digital tokens exempt from securities laws in the state.

Clarity with regard to regulation in the U.S. has not been coming as fast as many in the industry would like.  However, the situation is improving and so long as there are a few proactive states that seek to nurture innovation in the crypto and blockchain space at a minimum, that should be sufficient to facilitate development in the industry.