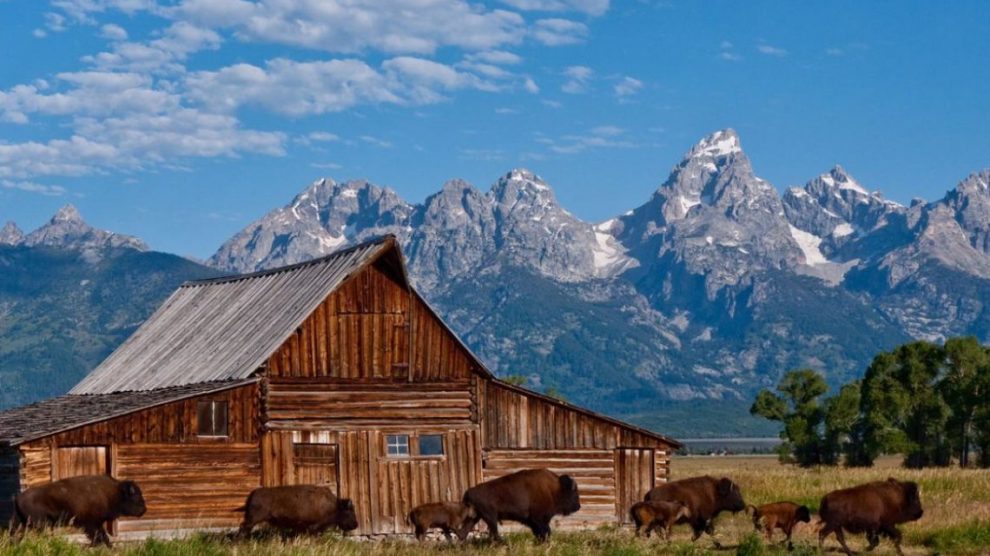 The state of Wyoming has passed a Blockchain Bank Bill with close to a unanimous decision.  The cowboy state has long been viewed as crypto-friendly and it appears that state officials are actively pursuing a strategy to make it an attractive proposition in a bid to stake its claim to a portion of the growing digital money business.

News of the decision broke when industry figure, Caitlin Long took to Twitter to make it known. 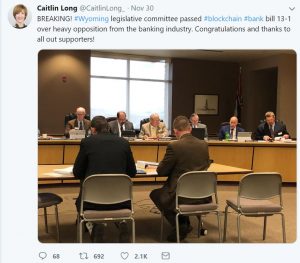 This legislation comes after Wyoming enacted five blockchain friendly bills earlier in 2018.  Six more bills are in the pipeline and have a good chance of success due to the fact that they are now ‘committee bills’.  Long clarified that the banks lobbied hard against the passing of the blockchain bank bill and were not impressed with the outcome.  As a consequence, proponents of the bill felt unsure of the outcome.

Despite this, the bill passed with thirteen voting in favour of the bill and one against.  The single vote against it came from a banker.  The bill will become law in January.

Long articulated that following the result of the vote, the Wyoming banking commissioner approached the Wyoming Blockchain Coalition to start the process of rule making relative to the bill.  The main objective of the coalition is:

“to educate Wyoming citizens about the power of blockchain technology to cut costs, streamline administrative processes and spur entirely new businesses in Wyoming.”

The coalition includes many prominent members alongside Long amongst its ranks including Overstock CEO Patrick Byrne, CEO of Symbiont Mark Smith and Mike Borowczak, James Calwell and David Chicoine of the University of Wyoming.  A working group is being set up through the Digital Asset Trade Association with a view towards working through these matters with the banking commissioner.

The purpose of the bill is to combat the experience up until now whereby conventional banks have been depriving or withdrawing banking services from cryptocurrency businesses.  That was also the experience of the Digital Asset Trade Association itself.  Furthermore, there are a very limited number of banks specializing in Know Your Customer (KYC) and Anti Money Laundering (AML) regulations as they apply to the cryptocurrency industry.  As a consequence, there are fewer on/off ramps to and from FIAT currency available.

The bill proposes ‘creating special purpose depository banks as a new financial institution’.  It goes on to clarify that ‘many financial institutions in Wyoming and across the United States refuse to provide banking services to blockchain innovators and also refuse to accept deposits in United States currency obtained from the sale of virtual currency or other digital assets’.

Long clarified that Wyoming legislators were not prepared to wait for the federal government to fix these issues given that they also affected some other business sectors which are already very important to the state.  She goes on to explain that it is beyond question that blockchain and cryptocurrency related businesses must comply with AML and KYC regulations.

She confirmed that Wyoming was solving real problems for the cryptocurrency industry whilst aiming to attract capital and jobs to the state, resulting in a win/win.   Long praised those in the blockchain community who had supported the bill.  She singled out senators Chris Rothfuss, Jim Byrd, Ogden Driskill and Tyler Lindholm for their support of the bill.

“Wyoming wants you to bring new jobs and capital to the state.  We’re not done yet! By the time we are, Wyoming will be the only U.S. state that can give you clarity on how blockchain assets are treated legally – trust me that will be huge.  Stay tuned because your lawyers will soon see what I mean”, she stated.

She suggests that a scenario in Wyoming whereby there will be zero corporate/personal income taxes, zero taxes on crypto-assets and legal clarity will mean that crypto-businesses will wish to move there or domicile their businesses there.