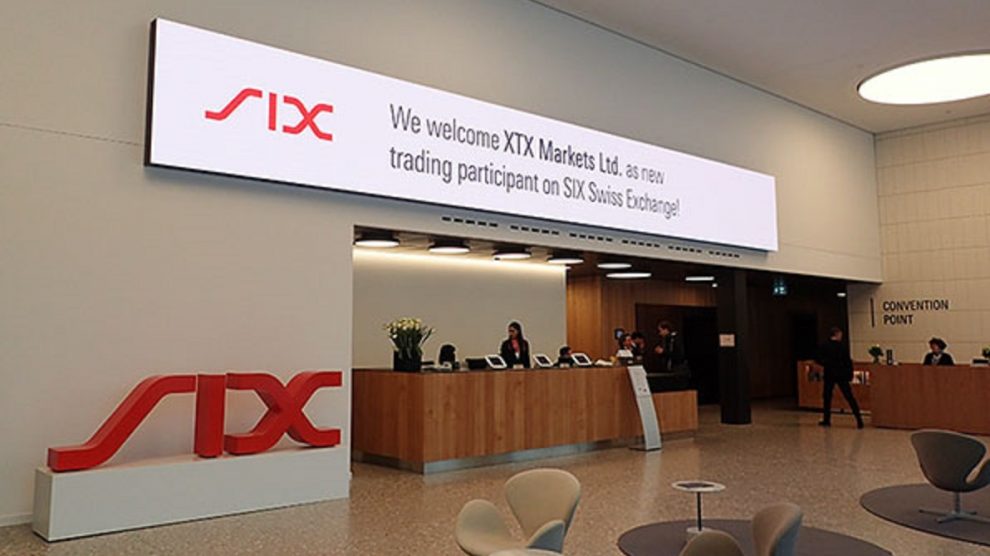 Switzerland’s primary stock exchange – SIX Swiss Exchange – has indicated that it will utilize blockchain technology as the basis for a new digital trading platform which it intends to launch later this year.

The SIX exchange is based in Zurich and is the land locked nations’ principal stock exchange.  The exchange also trades other securities such as Swiss government bonds and derivatives such as stock options.  The stock market index for the exchange is the blue chip Swiss Market Index (SMI).

Chairman of SIX, Romeo Lacher, alluded to the move in comments made earlier today.  SIX plan on running the new digital exchange in parallel to its existing conventional stock exchange.

The conventional exchange incorporates three distinct steps in the trading process.  Often the process may take a number of days to complete a trade.  With a blockchain backed trading platform, it is expected that two of those steps will no longer be required.  It’s on this basis that SIX expect its new digital exchange to overtake its traditional trading platform in terms of trading volume within a decade.

Blockchain technology is being used in a range of industries as the technology facilitates the opportunity to cut out middle men and intermediate processes.  Speaking to Reuters on the fringes of the Swiss Finance Institute conference, Lacher stated:

“The supervisory board will probably decide [on the project] in late Summer.”  Lacher added that the company were in the process of seeking clarification with regard to legal and regulatory issues via Switzerland’s regulator – The Swiss Financial Market Supervisory Authority (FINMA).

It’s expected that SIX will commence with trading of selected stocks to begin with.  Over time, the offering will be broadened over a greater range of stocks and bonds.  Ultimately, exchange traded funds will also follow, together with the tokenization of other securities and currently non-tradeable assets such as art and vintage cars.

SIX sees itself as being at the forefront in terms of exchanges moving towards a digital trading platform. With that, it is keen on raising money itself via the platform.  Confirming this approach, Lacher stated that SIX “want to start with [Its] own Security Token Offering (STO).

It’s clear that SIX has identified the threat posed to its existing business by securities tokenization and is now engaging proactively in the space in order to get a head start on both its existing competitors and newcomers.  Thomas Zeeb, Head of Securities and Exchanges with the company confirmed as much in comments made last November:

“The fact is, it takes two days for the buyer of a stock to become the owner.  The trade itself only takes a fraction of a second, but after that payments have to be settled and titles transferred.  If we put it all on our digital exchange, then the whole process takes only a few seconds.  This makes the market more efficient, but at the same time also takes risks out of the system.”

The majority of conventional world stock exchanges are now involving themselves with blockchain technology or the cryptocurrency sector in one form or another.  Borse Stuttgart – the second largest stock exchange in Germany, has partnered with SolarisBank to establish a cryptocurrency trading platform.

The London Stock Exchange (LSE) is collaborating with Asian digital trading exchange AAX, providing it with technology to power its platform.  The Nasdaq is launching Bitcoin futures later this year – having also invested in a number of cryptocurrency related startups recently.  Meanwhile, the parent company of the New York Stock Exchange (NYSE) – Intercontinental Group (ICE) – has formed subsidiary company Bakkt, which will launch in the coming weeks offering physically settled Bitcoin futures.