OKCoin, one of the world’s largest digital asset exchanges, announced today the launch of its licensed cryptocurrency exchange platform in Argentina.  This is its first venture into Latin America and according to the company, it’s the first of many such launches in the region.

From today onwards, cryptocurrency traders in Argentina can deposit Argentine Peso (ARS) in exchange for a range of cryptocurrencies including Bitcoin, Bitcoin Cash, Ethereum, Ethereum Classic, Litecoin, Ripple, Cardano, Stellar, Zcash and 0x – with more promised in the not too distant future.

The exchange goes further than local competitors by offering a broad range of FIAT to crypto trading pairs.  The company plans on opening an office in Buenos Aires shortly – with a view towards supporting its business not just in Argentina but in the region generally as it expands the reach of its services.  Earmarked for further expansion in the coming months are Brazil, Mexico and Colombia – identified by OKCoin as the markets in Latin America in which cryptocurrency trading is growing the fastest.

Tim Byun, CEO at OKCoin USA commented on the launch:

“OKCoin is committed to opening up new markets for digital currency consumers throughout the world, and we are very excited to bring our safe, secure and licensed trading platform to consumers in Argentina.”

Byun indicated further ambitions for the company in the region:

“This is just the beginning of our Latin American expansion, as we’re aiming to grow throughout the region by bringing institutional and retail traders there an array of trusted trading options so they can buy and sell with confidence.”

OKCoin already supports U.S. dollar to crypto trading in many countries throughout the world.  It’s strategy to accommodate further growth is to expand it’s offering of crypto trading pairs with local FIAT currencies.

Earlier this year, the company expanded in North America with the roll out of it’s services in California. In September, OKCoin extended their reach further by rolling out services in a further 20 U.S. States.

The announcement comes as OKCoin prepare to participate in the C20 Conference – A prominent crypto conference for the Spanish speaking world being held in Buenos Aires from November 16 – 17.

The Bitcoin Mag spoke to Pablo Magro, Business Development Manager at OKCoin about the new launch in Argentina, further expansion in Latin America and with regard to the company generally.  Magro explained that Argentina was chosen due to a high demand amongst traders that are looking to get involved in the growing cryptocurrency market.

There is a large cryptocurrency community in Argentina and the use case for cryptocurrency there differs from the rest of the world.  Argentinians are no strangers to FIAT instability over many years.  This has been brought to the fore once again following a 40% devaluation in the Argentine Peso over the past few months.  Local people are always looking for alternatives simply to maintain their wealth and purchasing power.  The default option has been use of the U.S. dollar.  However, cryptocurrency gives Argentinians another option in this respect and companies are facilitating that demand.

Magro believes that people may not have a preference for crypto over the U.S. dollar as a hedge against the Peso just yet.  As he explains, “ we are not there yet.  We are not that mainstream that everybody knows about this option.  It’s not as easy as an option to buy it, to hold it.  I think the whole industry is working on this to make crypto mainstream and to make this as easy as possible for the regular person to be able to hold crypto.  But as more people find out about it and try it, they see this as a real option to hold value.”

Resistance from the banks has been a theme with cryptocurrency exchanges worldwide but particularly so in South America including Brazil, Colombia and Chile. Magro clarified that this issue is well known to industry participants.  To him, it boils down to careful compliance in terms of Anti-Money Laundering (AML) and Know Your Customer (KYC) practices.  He said:

“As long as you have that clear and you have a good AML and KYC program, there shouldn’t be an issue with the banks.”

He points to developments in Brazil where the authorities there requested information from cryptocurrency exchanges in relation to their AML/KYC processes and practices.  Some of them responded, some didn’t.  OKCoin places heavy emphasis on compliance with these regulations and with that approach, its feeling is that there should not be any issues with the banks or the authorities as a consequence. 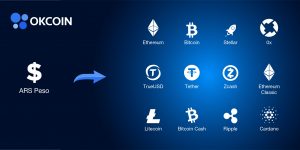 OKCoin and OKEX cater for the more professional or advanced trader, providing them with the tools necessary to trade and invest.  The company differentiates itself by offering a broad range of trading pairs.  Aside from spot trading, it also facilitates futures and derivatives trading in digital assets. Whilst it does this with Bitcoin, it is only one of two companies that offers futures/derivatives trading with digital assets other than Bitcoin.

At present, there is no other exchange in Argentina catering for the professional trader to this extent.  It would appear that this is a welcome addition to the cryptocurrency ecosystem in Argentina and apparently in Latin America generally assuming OKCoin follow through on their expansion plans in the coming months.  Latin America has lagged a little in terms of development in the crypto sector but roll-outs such as this one help it to keep apace with the industry elsewhere.