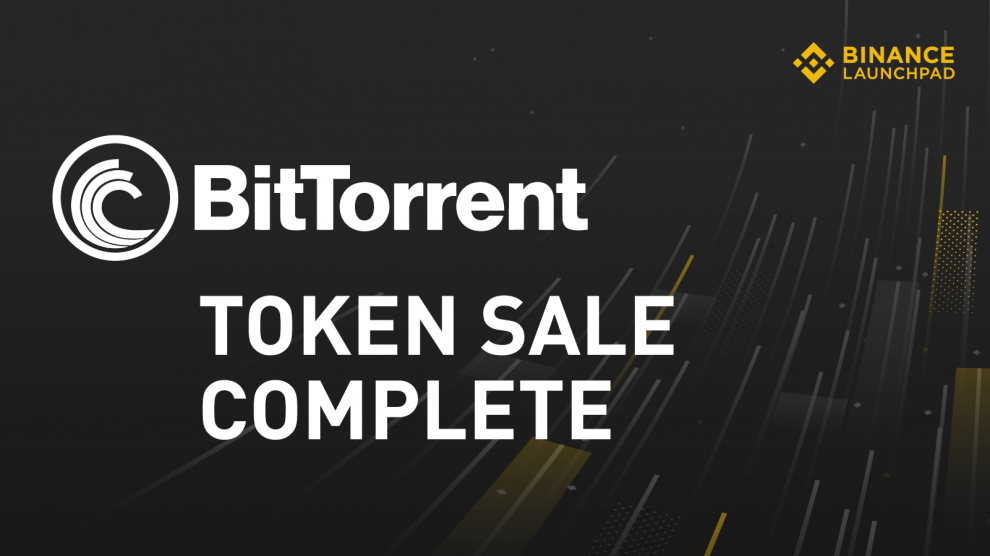 BitTorrent is a peer to peer file sharing network which has been around since 2003.  It allows its users to share and distribute files – usually video and music files – over the internet.

The Tron Foundation – the team behind the Tron cryptocurrency – bought BitTorrent for $126 million in July of last year.  Today’s token sale has come about as a direct consequence of the involvement of its parent company.

“Right now one of the biggest problems of the BitTorrent protocol is everybody’s seeding on good will.  So there’s no reward for the seeding at all.  So with lots of the software that uses the BitTorrent protocol, it actually helps you to disable the uploading when you’ve finished downloading.  So that’s why we want to provide this new way with tokens to incentivize people who are seeding the files.”

This opt in feature that Sun is referring to will be called BitTorrent Speed – and it’s set to launch later this year.

The tokens were sold in two batches on the Binance Launchpad platform.  One facilitated the purchase of the new token using Binance’s native token.  The other allowed those holding Tron (TRX) tokens to purchase the newly issued BTT token.

In both cases, the allocated tokens were sold out within 15 minutes.  Sun took to Twitter to publicize the success of the sale:

Binance CEO Changpeng Zhao indicated a similar opinion in terms of the success of the sale albeit that his comments suggest that the sale was not without its issues:

“Both sessions concluded.  Took about 18 minutes, due to a system issue, would have taken 18 seconds otherwise.  Demand was astronomical.”

The comments that follow both Twitter posts are peppered with complaints from those that wanted to buy the token but couldn’t gain access due to technical issues experienced on the Binance Launchpad platform.

Despite an occasional setback, the token of BitTorrent’s parent company, Tron, has been on an upward trajectory in recent weeks.  This was underscored today when the cryptocurrency market generally took a tumble.  Tron’s token price dropped slightly whilst the majority of other crypto’s suffered major price falls.

There’s no doubt that the tie up with BitTorrent has captured peoples imaginations in terms of the potential involved in exposing 100 million BitTorrent users to cryptocurrency.  Furthermore, the Tron network has been showing some favourable numbers in terms of transactional use.  It is being positioned as a platform for decentralized apps and if it can achieve the transaction rates claimed, it could potentially be in a position to challenge networks such as Ethereum.

However, the project has not been without its critics.   The most recent dissenting voice has been that of Simon Morris – former Chief Strategy Officer with BitTorrent.  Morris claims that the Tron platform is not capable of handling the level of token activity anticipated once the new BTT token is running on it.

Sun clarified that Tron is currently capable of processing 2,000 transactions per second.  To facilitate the demand that the BTT token is expected to bring about, he said that the Tron foundation are working on creating a payment network side-chain which will process thousands of transactions, later recording them on the Tron blockchain.