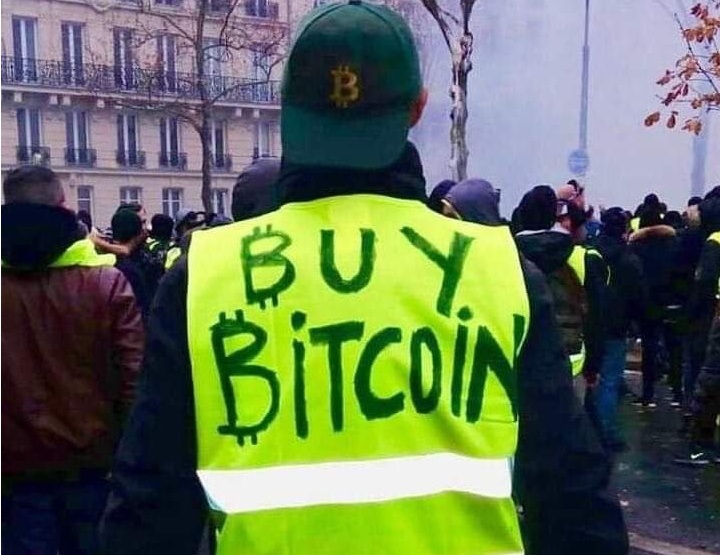 Reports emerged from France on Monday that the ‘Gilet Jaune’ or ‘Yellow Vests’ protest movement are planning a run on the banks.

The group emerged as a political movement for economic justice in France which came to public attention in 2018.  It is somewhat unique as it gathers together protesters who generally hold differing political ideologies, from far left to far right – unifying them under a common grievance of economic inequality.  Its objective is to bring down French President, Emmanuel Macron and reinstate French sovereignty out from under the influence of globalists and European Union bureaucrats and elitists.

Polls have suggested that the movement has the support – in principal at the very least – of 70% of the French public.  This is significant in the context of news of this latest initiative to coordinate a run on French banks.

A Youtube video was posted on Monday by a prominent member of the movement.  In the video, Nicolle Maxime stated that he was trying to rally other individuals within the movement to withdraw money from their French bank accounts.  The motivation is to put pressure on the French financial system and thus, indirectly pressurize Macrons government.

What has this got to do with Crypto?

The move is significant from a cryptocurrency perspective as it would serve to highlight some of the deficiencies in the traditional financial system that brought about the development of crypto in the first instance.

Throughout the world, banks implement fractional reserve banking.  The nature of this ubiquitous banking practice is such that banks accept deposits from consumers and then use this money to make loans and investments whilst only a fraction of those initial deposits are held by the bank.

In a circumstance whereby a large proportion of customers demand their money at the same time, a bank is unlikely to be able to meet that demand given that they are not holding sufficient reserves.

Such an event could serve to demonstrate to ordinary people the fragility of the financial system that they have placed their trust in.  By contrast, Bitcoin and cryptocurrency generally is all about taking personal responsibility for your own wealth and empowering people to store their own money – outside of the control of banks and governments.

In Maxime’s video, there was no mention of Bitcoin or cryptocurrency.  Similarly, cryptocurrency has not featured in any official activity of the movement thus far.  Notwithstanding that, there have been several sightings during protests of individual protesters wearing yellow vests with pro-crypto statements written on them.

In following coverage of the protests, Anthony Pompliano – founder of Morgan Creek Capital Management, an asset management company in the crypto sector – commented on the matter last December:

“The protests in Paris are an interesting development for economic inequality around the world.  People are fed up with governments using the printing press to increase the cost of living, while driving more folks into poverty.”

It is unclear to what level this is being coordinated.  Furthermore, there is no direct implication for cryptocurrency.  However, it would be fair to say that for those looking on from the crypto community, Bitcoin could play a part in aiding this movement.  Furthermore, it clearly emerged from a similar sense of inequality in and distrust of the traditional banking system.

Max Keiser, host of the Keiser Report and Bitcoin proponent expressed his take on the French protests last month on twitter.  He said:

“If every French person converted 20% of their bank deposits into #Bitcoin (and got a Bitcoin debit card to use for day-2-day stuff), French banks and the government would collapse and a lot of bloodshed could be avoided.”