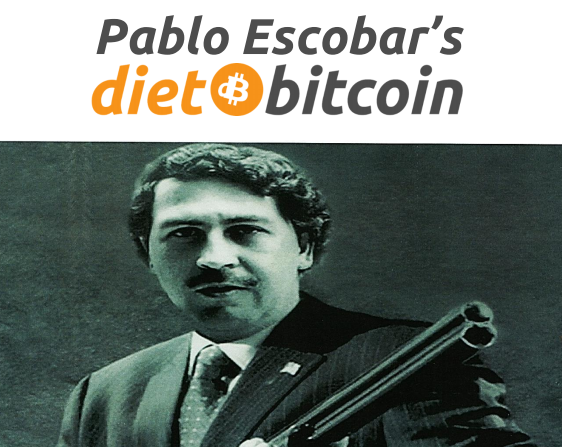 The brother of the world’s most infamous Colombian drug-lord Pablo Escobar, has just announced the creation of an ICO for his new cryptocurrency DietBitcoin (DXX) which is claiming to be a lighter, faster version of Bitcoin.

With somewhat of a history in utilising high gains in a demanding market, it has been reported by CNN that Roberto Escobar has urged prospective investors to ‘buy as many dietbitcoin’s as you can afford, the value will be very high soon’.

Formerly a key player in Pablo Escobar’s Medellin cartel, Roberto nicknamed El Osito, had an  interesting past involving smuggling, prison escapes and 11 years in a high-security prison before switching cocaine for cryptocurrencies in his recent endeavour. It has been announced that Escobar will be working alongside Olof Gustafsson to manage the coin and will be run by a central company, which is initially funded by Escobar Inc. advertised as a privately run investment holding company which is based in Puerto Rico. The legitimate company is an offshoot following Escobar’s $100 billion profits throughout his career, reports The Blast.

The coin itself is currently valued at $2 per coin and will see 300,000 Dietbitcoins released for the first pre-ICO round, before several other rounds at increased prices. It has been reported by the Cointelegraph that the currency has a supply cap of 21,000,000 coins.

The story takes an interesting turn when looking at the Whitepaper which proposes the currency. Alongside the announcement, Escobar also released a 230 page electronic book titled ‘The True Story by Roberto Escobar: Pablo Escobar’s Dietbitcoin’ that details the business man’s plunge into the cryptosphere alongside several backstories, the fifth chapter simply being named ‘The Drugs’ alongside ‘The Letterbomb attack’ and ‘The hidden ten million’. One of the highlights of the book, in some ways more entertaining than the thought of the currency itself, is Escobar’s claim that Bitcoin is actually the brainchild of the American government.

‘The world is going to see that this was created by them. And when they see it, it is too late, and when the CIA founds out that the world knows about this, the CIA is going to sell all of their coins, and they will destroy the value of Bitcoin…That’s why I am creating my own cryptocurrency called dietbitcoin (DDX)’

It is at page 250 of the book that Escobar then begins to detail how he was approached by the founder of Bitcoin, Satoshi, to have a meeting. The story details Escobar’s suspicions of Sakoshi Nakamoto before eventually discovering he was an undercover C.I.A agent. Alongside a photo of the passport apparently belonging to Satoshi himself, the single chapter on cryptocurrency certainly provides an interesting outview on the digital sphere.

It might just be the case that Roberto Escobar is capitalising on his family name and the currency becomes another ‘jokecoin’ amongst the reams of other well-known characters also creating digital money. At a time when governments and financial regulators worldwide rally to impose regulations within the crypto industry, this new revelation certainly raises some questions around the topic, if not plunges progress with cryptocurrencies hurtling back to square one.

However as much as it sounds like an offshoot of another Narco’s TV series, the currency, the book and the company behind it are all completely real. The question is raised around what activities this coin is even funding. An alternative curve-ball, for the likes of a generation hyped up on the Netflix show, the easy prospect of buying a few coins and gaining a very tenuous toe in the door to an involvement of the Escobar empire might just sound so ridiculous that it possibly might just happen.