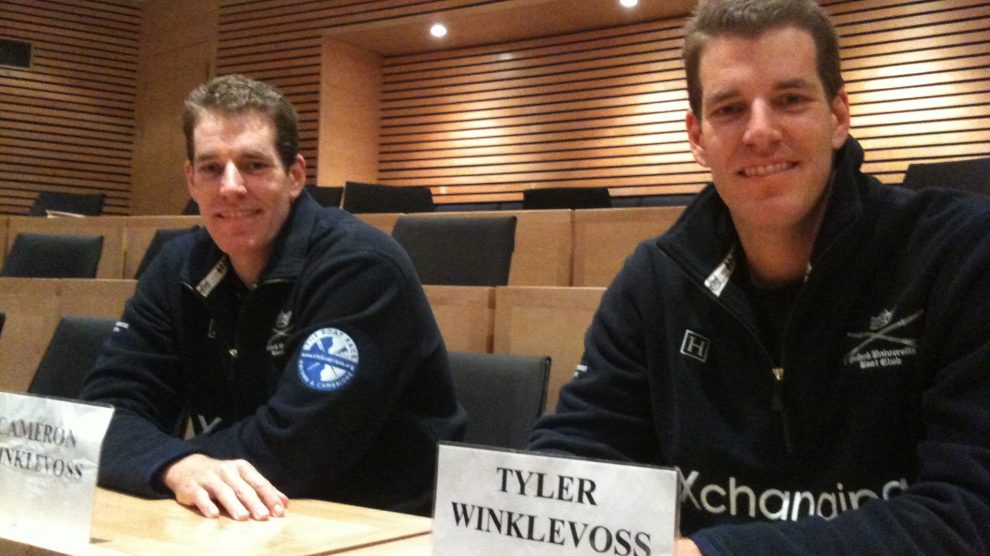 While diversity issues in tech have been high up the agenda over the last year, less attention has been paid to new technologies and making sure they don’t fall into the same trap as Silicon Valley’s Finest.

It’s hardly surprising that the Winklevi are heavily invested in Bitcoin. A subsection of social media profiles which boast about wealthy lifestyles revolve around money earned from Bitcoin. Take, for example, Peter Saddington, who bought a brand new Lamborghini Huracan with his Bitcoin wealth and then posted a YouTube video about it that the world really wouldn’t have suffered from being devoid of.

Such stories are plentiful. The New York Times briefly reported stories of the North American Bitcoin Conference in January which comprised 84 male speakers, three female speakers, and held the official conference party in a Miami strip club. And it gets worse, when DateCoin was launched it posted an ad on Facebook which featured a reclining woman in a swimsuit with accompanying text “Touch my I.C.O.” One wonders if the creators genuinely thought that was going to work.

The amount of money flying around the crypto community, and the way it’s being spent is, as Vice highlighted in a fantastic illustration, all too reminiscent of Wall St in the 80s.

That being said the situation has led to some hilarious circumstances such as one reported by Bloomberg where 600 crypto-enthusiasts embarked on a yacht party as Bitcoin’s price plummeted from $13,500 to $10,000, wiping millions off the wealth of the attendees. Which is just delicious.

But leaving the gossip and schadenfreude aside for a moment, and introducing the intimately linked world of blockchain to the mix, we seem to be staring at the rise of a new industry which is in the process of making the same mistakes as the last new industry. Non-profit #MoveTheDial points out that 53 percent of tech companies have all-male executive teams, and diversity is an issue which all of Silicon Valley’s biggest players are still far behind on.

The worlds of blockchain and cryptocurrencies have not solved the problem as Tiffany Madison, a founding partner of blockchain advisory DecentraNet, pointed out in an interview with Forbes:

“Like the broader tech industry, there is a gender equality gap in blockchain technology. I think this is attributed to the fact that in the initial days of crypto, the earliest voices advocating widespread adoption of privacy-enhancing cryptography (as a facilitator for social and political change), were mostly male. That is changing.

“Speaking only for myself: while there is certainly a disparity between men and women in this space, I think the industry is rapidly evolving into a culture of inclusion. In my experience, the community is comprised of highly conscientious individuals that sincerely strive to include women and all underrepresented groups in the industry. These efforts will naturally continue to attract more female involvement. This is important to me.”

What’s more is that the involvement of women could be hugely important for blockchain and cryptocurrencies. Since a blockchain ledger is immutable it secures agreements in a far more intractable way, leaving them less open to post-hoc revision. And, as Fortune articulate, this could be particularly important for personal records, contracts and payments, since these are three areas which can be tools of male power, especially in the developing world.

It’s hopeful that diversity issues have come to a head while these new industries are in their early days, and perhaps that will lead to better equality as they develop. And as a little cherry on the cake, it’d be seriously cool if Satoshi Nakamoto was finally doxxed and found to be a woman.

The crypto-debate is in a sorry state: Google, Christine Lagarde and the Winklevoss twins
Bitcoin’s latest dip: Yet more exchange issues and the predictably unpredicted SEC statement