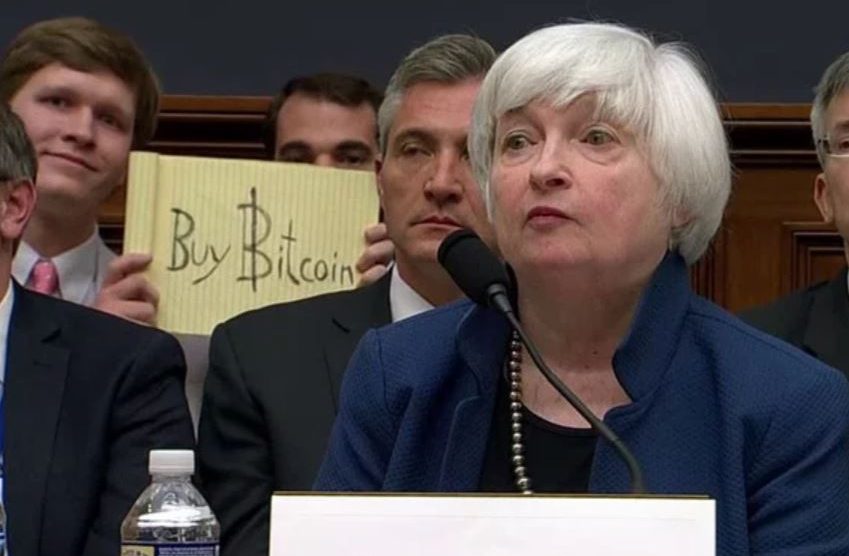 Speaking at the Canada Fintech Forum in Montreal on Monday, Ex-Federal Reserve Chair, Janet Yellen slated cryptocurrency Bitcoin.  Her criticisms were in the same vein as that of the recent outspoken cryptocurrency critic – renowned economist Nouriel Roubini.

Roubini – a perennial critic of cryptocurrency – was scathing in his commentary on Bitcoin in recent weeks via Twitter and in his testimony for the Hearing of the U.S. Senate Committee on Banking earlier this month.

Yellen came to the attention of the cryptocurrency community whilst being critical of Bitcoin in her testimony before the House Financial Services Committee last year.  During the course of that testimony, an audience member held up a ‘buy Bitcoin’ sign in the background within view of the camera – an image that went viral on cryptocurrency related social media.

The rationale articulated by Yellen during the course of her speech as to why Bitcoin is unsuitable as a currency ran along similar lines to that of Roubini. She maintained that very few transactions are actually handled by Bitcoin whilst many of those that do are illicit transactions.  On that subject she added:

“I worry about the implications with the use of cryptocurrencies for terrorists, financing money laundering and the like.”

She also condemned Bitcoin on the basis that for something to be a currency, it needs to be a stable source of value and “Bitcoin is anything but”.

Yellen maintains that Bitcoin is very slow in handling payments and that the majority of it’s difficulties manifest as a direct consequence of it’s decentralized nature.  She added that there is potential theoretically for the breakdown in the current trust held in Bitcoin – her inference being that it’s underlying technology could be compromised.

Energy usage was another aspect that she was critical of with regard to the worlds most well known cryptocurrency:

“The amount of energy that is used because of that decentralized nature and the cost of that is really high in comparison with the means of payments we use ordinarily.”

Her focus then moved towards consideration of a central bank controlled digital currency.  She articulated that during her time at the Federal Reserve, there was not much enthusiasm expressed for the notion of a FedCoin.  Notwithstanding that, she acknowledged that there are currently a few countries who are considering implementing such a digital currency.

Yellen pointed to the fact that cash has been the source of terrorist funding and money laundering.  With that in mind, she guarded against any degree of anonymity with regard to the implementation of a central bank controlled digital currency.

Cyber security is another aspect that she’s not comfortable with in terms of any proposal to implement a state backed and controlled cryptocurrency:

“I think we have to worry about cyber security.  The source of transactions would be an obvious target for cyber attacks.”

These comments from the former chair of the Federal Reserve have sparked a response from the cryptocurrency community.  Many suggested that Yellen and her peers represent a demographic that doesn’t have a complete understanding of cryptocurrency.  Furthermore, that innovation always stems from a younger sub-set of the population.  Others still expressed the view that establishment figures like Yellen felt threatened by the emergence of this new technology.

Yellen may see no value in Bitcoin as a potential currency or store of value but the fact that it is continually the subject of discussion at the highest levels these days means that it’s emergence is certainly being taken seriously.