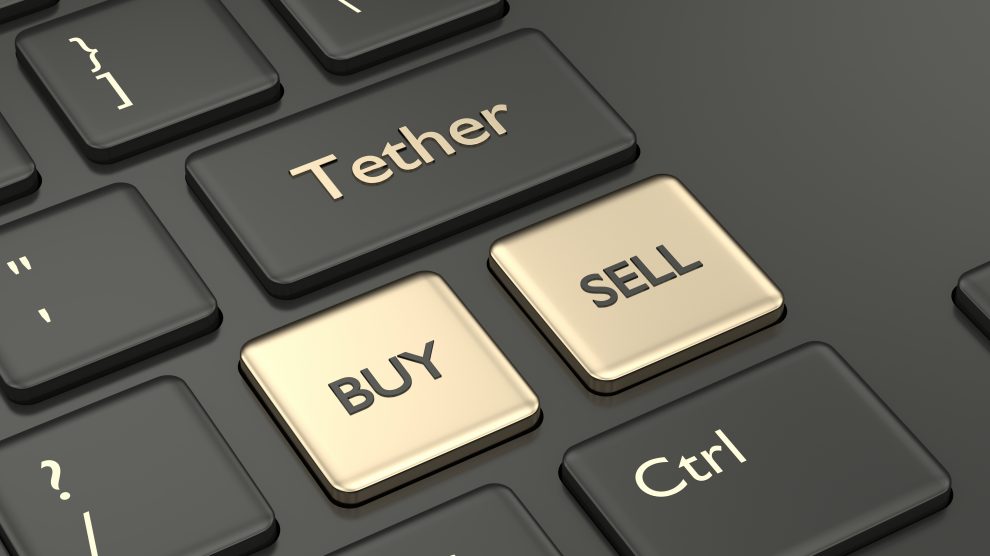 Last week, well known cryptocurrency exchange Bitfinex suspended deposits in fiat currency. The suspension covers GBP, EUR, USD and JPY wire deposits. It’s logical to assume that this has come about due to banking issues the exchange is experiencing.

Although never confirmed, it has long been suspected that Bitfinex has been banking with Noble Bank in Puerto Rico. However, according to a report by Bloomberg earlier this month, Noble are having difficulties and the Bank is up for sale. It was speculated at the time that they had lost a lot of business – including Tether/Bitfinex.

Last year, Wells Fargo withdrew banking services from Bitfinex. In the immediate aftermath, Bitfinex filed a lawsuit against the bank – although this action was later dropped. Dutch bank ING later confirmed that it had a facility in place with Bitfinex, but it would not confirm the nature of the service offered.

In April, $371 million was seized by Polish authorities from 2 accounts suspected to be linked to the Colombian drug cartels. Bitfinex were rumored to be implicated. Whilst acknowledging the allegations, they denied any involvement.

Around the same time, Bloomberg suggested that Bitfinex had created a complex structure involving third party Panamanian bank accounts in order to maintain banking access and keep their operations online.

Recently, The Block reported that Bitfinex now had banking facilities in place with HSBC. Larry Cermak, Head of Analysis at The Block, took to Twitter to break the news: 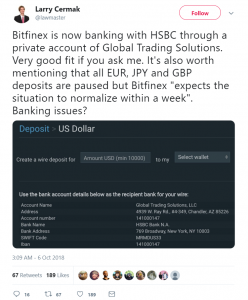 The suggestion is that Bitfinex are accessing banking with HSBC via the private account of Global Trading Solutions. Cermak also states his view that this is a “very good fit.” Clearly, he’s referencing the previous allegations that Bitfinex has been facilitating money laundering whilst also referring to HSBC’s involvement in recent years in the laundering of drug money for Mexican cartels, for which it was subject to a $1.9 billion fine.

On Monday, Bitfinex published a blog post providing an update on its withdrawal of bank deposit facilities. In the post, it clarified that all cryptocurrency and fiat withdrawals have been processed as normal since it announced the temporary account limitations on October 11. It confirmed once again that fiat deposits have been temporarily paused for some user groups.

The company suggest that they hope to have a robust fiat deposit system in place by October 16.

In a further twist, sister company Tether faltered when its stablecoin – which is pegged to the U.S. dollar – dropped 5%. On the Kraken exchange, it dropped as low as 85 cents. However, it appears to have generally recovered to the level of 96 cents.

Meanwhile, other stablecoins such as True USD were trading at a premium as investors bailed out of Tether and sought alternatives. For the same reason, the top three cryptocurrencies – Bitcoin, Ethereum and Ripple – were up on average by 5%.

Tether is supposed to be backed by U.S. dollar reserves that the company claims to hold. However, there has been much controversy over this due to an inability on Tether’s part to produce comprehensive independent audits following the dissolution of its relationship with auditors Friedman LLC towards the end of last year.

Software developer and once lead developer on the Bitcoin project, Gavin Andresen, commented on the matter on Twitter:

“I hope some Tether person writes up an insider’s description of what is happening behind the scenes right now as the peg fails. I’m sure there are lessons other stablecoins can learn”.

However, in response to his tweet, others speculate that the reason for the drop in Tether’s value was due to a misunderstanding that Binance were delisting the coin based on fake information circulated on social media. Tether and Bitfinex have dodged many bullets in the past. The next few days should be instructive in terms of learning if it’s done the same on this occasion.