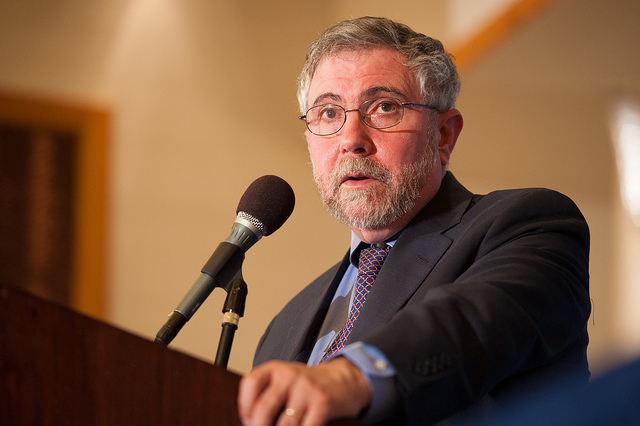 Renowned economist Paul Krugman has been vocal in the past in voicing his opinion on the inadequacy of Bitcoin.  In a New York Times op-ed piece published at the end of last month titled ‘Transaction Costs and Tethers:  Why I’m a Crypto Skeptic’, Krugman notably stated;

“Cryptocurrency enthusiasts are effectively celebrating the use of cutting-edge technology to set the monetary system back 300 years. Why would you want to do that? What problem does it solve? I have yet to see a clear answer to that question.”

He wrote the piece whilst on vacation with his thoughts turned towards an upcoming blockchain conference he had agreed to attend as a guest speaker stating that;

“If you only speak to friendly audiences, you’re not challenging yourself enough.”

The forum in question was the ChainXchange Conference in Las Vegas at which he spoke last week.  The most interesting take away from his speech was the indication that he believes that Bitcoin has more utility than gold. He stated;

“Gold is dead… Bitcoin has more utility than gold” . . . “There is some chance for Bitcoin to be valuable in the future.”

Responses have been posted amongst the twitterati from all sides of the debate.  The significance of the statement from the renowned economist was not lost on trader/analyst/commentator and passionate proponent of cryptocurrency, Andy Hoffman.

THIS is our moment in history! Fiat is failing, gold is dead, and Central banks are cornered. GLOBAL #BITCOIN ARMY, NOW is the time for the #BTC-led DIGITAL MONETARY AGE to begin!

Clearly, Hoffman believes that this is an indication that with expectations for other forms of conventional currency currently being weak, the opportunity presently exists for Bitcoin to come to the fore with greater potential to gain traction.

However, his belief contrasts sharply with the view held by stock broker, financial commentator and ardent gold bug, Peter Schiff.

Paul Krugman said gold is dead. In fact, “Bitcoin has more utility than gold,” according to the popular lefty economist. Krugman points out, they are backed by the “full faith and credit” of the US government. Tell that to the people of Venezuela. https://t.co/f2bmnNcmpE

Schiff trades in gold through his company Schiff Gold L.L.C.  He recommends that investors hold between 5-10% of their portfolios in gold.  Furthermore, with the stock markets perceived to be over-bought for the last while, he has become a frequent commentator on the subject – recommending that investors use gold as a hedge against impending stock market doom.  Unlike the vast majority of libertarians, Schiff is a Bitcoin and Crypto skeptic.

The adjectives Krugman has used in the past to describe cryptocurrency are; Useless. Evil. Antisocial. Worthless. Impractical. Bubble. Fraud.  Whilst Krugman made this particular comment (Bitcoin has more utility than gold), his scepticism of Bitcoin remains.  He also clarified that his current understanding was limited to Bitcoin – and that he didn’t have a full understanding of other cryptocurrencies. In January, Krugman was exuberant in tweeting that Bitcoin was ‘too clunky and expensive’ when a Bitcoin Conference stopped accepting Bitcoin as a form of payment.  Whilst still unwavering in his scepticism, the tone and degree of his criticism seemed to lack the same depth at last weeks conference. He maintained that his main objection to Bitcoin right now is transaction cost and should that be removed, he would no longer hold major opposition to the cryptocurrency.

By his own admission, cryptocurrency and Bitcoin are not central to his considerations.  With that, it may well be likely that he is not aware of the body of work that is being carried out with regard to scaling solutions and the route that Blockchain 3.0 coins have taken with far less intensive Proof of Stake systems, faster and cheaper transaction times/rates and in the case of Bitcoin, the ongoing development of Layer 2 solutions such as Liquid and Lightning Network and Layer 0 solutions such as BloXroute.  With that, it will be interesting to see if there is a further shift in the thoughts of the Nobel Prize winning economist as the technology – and it’s ecosystem – develop further.