Fidelity Investments – one of the largest asset managers in the world with in the region of $2.5 trillion under management – has reactivated a venture capital fund which centers on crypto-related assets.

Fidelity launched the fund last fall to gain exposure to digital assets.  Initially, the fund was small and exploratory.  Notwithstanding that, it was seen as a significant move given the stature of Fidelity in the financial services sector.

Through this fund, Fidelity were stealthily becoming one of the most active Wall Street firms in cryptocurrency.  However, the project suffered a setback earlier this year when key members of the management team left the company.  A former vice president at Fidelity – Matt Walsh, and investment research analyst Nic Carter were both heavily involved with the project.

Walsh and Carter left to found Castle Island Ventures – a venture capital firm which focuses on digital assets.  Frank Chaparro brought the fund and the departure of these key employees to light back in June and it is sources known to Chaparro who are now confirming that the fund is back up and running.

News of the rejuvenation of the fund comes just over a month after another significant announcement by Fidelity related to cryptocurrency.  In mid October, it was announced that Fidelity were spinning off a separate company called Fidelity Digital Asset Services.  The objective of the new company is to handle custody for cryptocurrencies and execute trades on cryptocurrency exchanges on behalf of investors.  The move is widely seen as hugely significant for the industry as through this service, Fidelity will play a key role in making it easier for hedge funds and institutional investors to actively invest in cryptocurrency.

At the time of the announcement, Abigail Johnson – CEO of Fidelity commented:

“Our goal is to make digitally native assets, such as Bitcoin, more accessible to investors.”

“We started exploring blockchain and digital assets several years ago, and those efforts have been successful in helping us to understand and advance our thinking around cryptocurrencies.”

He confirmed that the establishment of Fidelity Digital Assets was just the start and that Fidelity have a long term goal to create a full service enterprise grade platform for digital assets.

Given that it serves 13,000 institutions, there’s no doubt that Fidelity can further the market reach of cryptocurrency.  Whilst first customers are being on-boarded now, general availability is scheduled for Q1 2019, creating the potential for a momentous push into the cryptocurrency market by the institutional asset manager.

At the time of that announcement, former Fidelity vice president, Matt Walsh tweeted the following: 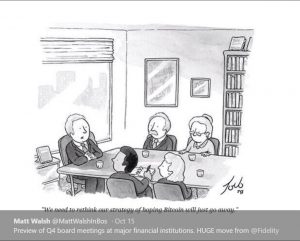 His tweet underscores the importance of the move by Fidelity and an acknowledgement of a change in thinking by the conventional financial services world to embrace cryptocurrency rather than attempt to suppress it.

Phillip Nunn, CEO of WealthChain Capital commented on the subsequent disclosure by Jessop of their plans for the subsidiary company:

“Why would Fidelity pursue this if it was just a flash in the pan?”

As retail investors, many of us could be forgiven for feeling a bit despondent in 2018 and more recently still given the latest collapse in cryptocurrency prices over the past 2 weeks.  However, it seems at a grander scale, companies such as Fidelity are undeterred by the current market as they advance their plans to stake their claim in the cryptocurrency sector.