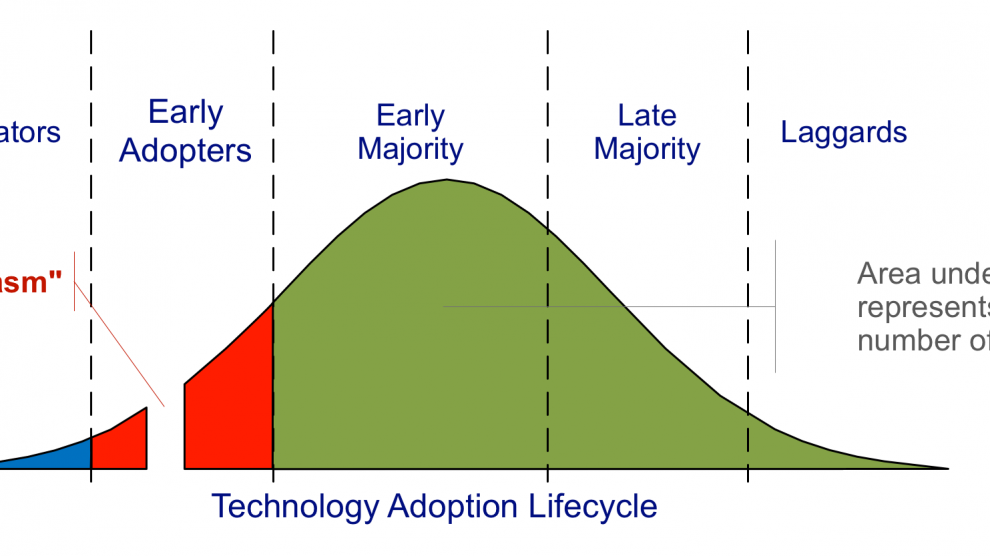 We all have one person in our social circle that has the latest app or gadget which they swear is going to be “the next big thing.”

Their desire to stay ahead of the crowd might occasionally get on our nerves, however, this mentality, to seek out trends before they become popular, can be considered the fuel that enables an idea to spread like wildfire.

This small cluster of individuals, that seek out and use new technology and ideas, are known as ‘early adopters’. This segment of society makes up one of the five groups of the Innovation Adoption Lifecycle. This belief advocates that ideas spread programmatically through society across five separate groups, as the chart above demonstrates.

Ideas are first conceived by innovators, these can be considered the individuals who are the incubators, start-ups, and thought leaders for change and innovation, who roughly comprise of 2.5% of the overall population.

Once a novel idea is introduced into society, it is then tried and tested by a small group of inquisitive individuals known as Early Adopters. Besides Innovators, these individuals are arguably the most important group in the cycle, as they often dictate which ideas are embraced by society. This group is slightly larger than innovators and makes up roughly 13% of the population.

When an idea is adopted and encouraged by Early Adopters, assuming it is a success among this group, the rest of society slowly begins to follow. Pragmatically passing through each group, much like a domino effect, until the idea is almost completely integrated, and everyone from Innovators to Laggards, the last group, are on board.

If this process sounds familiar, it’s probably because we are currently experiencing a unique form of this process in the shape of Bitcoin. For example, in 2010 Bitcoin was worth $0.39, this year it reached the price of $19,000. This incredibly rise can be considered the product of early adopters, investing in the currency, demonstrating social proof, encouraging others to also adopt, allowing it to snowball into the success story that it is today. A recent chart posted on to the subreddit Data is Beautiful demonstrates this, highlighting the correlation between Bitcoin value versus Google search interest.

Interestingly, MIT conducted a study in 2014 to identify the nature and behavior of early adopters using Bitcoin. MIT Sloan School of Management professors Christian Catalini and Catherine Tucker created The MIT Bitcoin Project which offered all incoming freshman the opportunity to receive $100 worth of Bitcoins to take part in the study. The two academics identified this new technology as a perfect opportunity to monitor early adopters in a controlled environment.

The opportunity was met with great enthusiasm and 3108 MIT freshmen signed up to the experiment’s waiting list. Early adopters were considered the first 25 percent of students to sign up on the waiting list in the first 24 hours. They classified the rest as late adopters.

However, instead of distributing the currency in the order that people had signed up, Tucker and Catalini randomly delayed the process, giving half the participants their bitcoins by two weeks. “Some natural early adopters got their bitcoin right away, and other early adopters had to wait,” says Catalini, with the latter forced into the role of late adopters.

While this is an impressive result providing insight into the minds of early adopters, it’s their ability to influence others that came as the most insightful finding. When early adopters cashed out, they also encouraged those around them to do so in high numbers: 225 days after the experiment began, dormitory buildings with more delayed natural early adopters had 45 percent fewer active bitcoin users – suggesting that early-adopter behavior influences that of late adopters.

These results suggest that early adopters can suppress the initial increase and accelerate the flattening of the curve if you compromise their ability to be first and to brag about that fact.

Overall, society has witnessed the rise and fall of many ideas, Bitcoin is not the first and it almost certainly will not be the last idea to transition through the Innovation Adoption Lifecycle.

Weiss Ratings Analyst: Bakkt to Usher in Institutional Money in 2019

The Move Away from Centralized Exchanges Continues

The Crypto Exchange Business: An Insight Beyond The Top Global Exchanges

Progressive Step Towards Crypto Self Regulation by Virtual Commodity Association

Cambridge University Study: How Prevalent are Cryptocurrencies?
Turing-completeness: How Ethereum Does what it Does