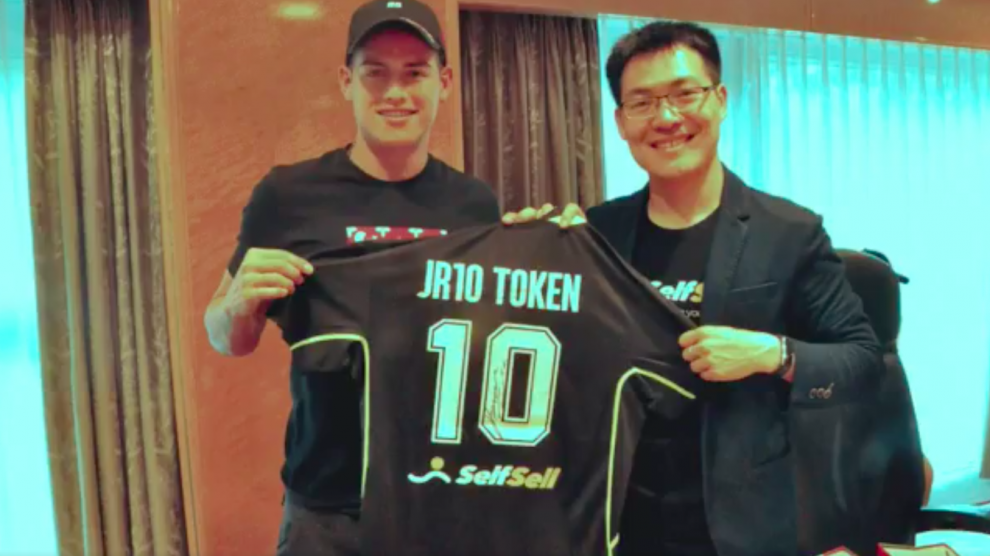 Colombian superstar James Rodríguez is used to setting historic heights. As he is about to kick off his second World Cup in less than a month, the first time around saw a then 22-year-old Rodríguez take Colombia to the tournament quarterfinals for the first time in the country’s history while leading the event in scoring with six goals.

Now, the Bayern Munich star is setting milestones off the field as well with a new cryptocurrency called JR10 Token that is partnered with blockchain startup SelfSell. The virtual coin became available on Sunday, making Rodríguez the first active international football player to put out his own brand of crypto-coin. Retired English star Michael Owen recently launched his own blockchain-tech called ‘OWN.’

Rodríguez’s JR10 Token was reportedly so popular that the first pre-sale batch of coin sold out in 12 seconds when it became available Sunday, according to SelfSell’s official press release.

A brand “new me”, sponsored and brought by SelfSell, will be activated. Will you guess what it is? Jump to download SelfSell App and join me. @self_sell pic.twitter.com/OXugqJq3uH

“The attacking midfielder has been in great form, is definitely one of the future world football superstars and his fanbase keeps growing accordingly,” the news release read. “But as a millennial, he intends to be digitally one step ahead; not only is he active on social networks, but he wants to create a new type of relationship with all the fans supporting him. This is why he decided SelfSell could help him develop his career even more.”

SelfSell was founded by Li Yuan, who said that the blockchain technology will take on some unique characteristics as it can be used to buy and sell tickets, as well as exclusive James merchandise and souvenirs only available through the JR10 Token.

Li said that fans can now be “more than just cheering spectators, they are also the beneficiaries of his growing value.”

Rodríguez found it’s “a super cool trial” to launch a token branded with his own name and bring valuable gifts to all his fans.

“Now I have come to a new field and brought everyone a brand new me,” he said.

An initial percentage of coins will be given out to already registered fans of James free of charge to give the cryptocurrency a quick boost as it gets off the ground. The coin can only be bought and sold through the SelfSell App.

*A version of this article was originally published by our partner site Colombia Focus.